This young Western Diamondback Rattlesnake found a comfy place snuggled next to the roots of our rosebush. Most venomous snakebites in Texas are inflicted by this species. To be safe, look before you reach into flower beds and other places where rattlesnakes might be. Try not to fear them. After all, venomous snakes are just “another strand in the web of life.” 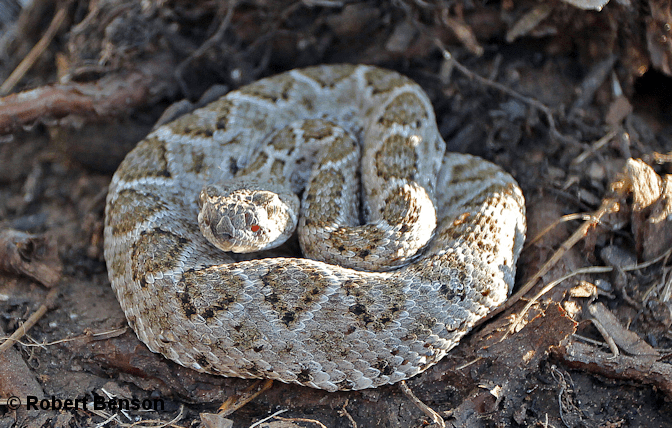 Robert Benson photo
It was small. It was a soft, delicate gray color with brownish saddle-shaped patches on its back. In its coiled-up position, it would fit in the palm of my hand. But I wasn’t about to put it in my hand! At least, not until I was sure of what kind of snake it was. It might be a venomous snake.

Like most people, I am cautious around snakes. I consider it a healthy caution. I am not afraid of snakes, mind you, but I am well aware that there are four kinds of poisonous snakes in Texas. These are the rattlesnakes, copperheads, coral snakes, and water moccasins. I have learned the identifying marks for these kinds of snakes. When presented with any snake, I make sure it isn’t one of these.

If it isn’t a poisonous snake, I usually pick it up. Snakes are easier to catch than lizards. Snakes are delightful to hold in the hand. They are cool, smooth, and so very flexible. I have had lovely, green grass snakes weave themselves through my fingers making a “cat’s cradle” of their bodies. They taste the air with their slender forked tongues. They look you in the eye, unblinkingly. (They can’t blink; they have no eyelids.)

However, this small, gray snake coiled up under a rosebush seemed to glare rather than stare. I think this was because it had a slight ridge above each eye. These ridges made it look like it was frowning. Perfectly round-eyed snakes are generally “safe” snakes. Those with the bosses above their eyes should make you think twice about picking them up.

So I did think twice. And I called my husband. He took a small stick and gently touched the snake. It rapidly uncoiled and shook its tail. There was a faint buzz. It was barely a foot long but it was indeed a rattlesnake. The black-and-white bands surrounding the body near its tail confirmed it. It was a “coontail” rattler, otherwise known as a Western Diamondback Rattlesnake.

You may have heard that baby rattlesnakes have no venom. This is not true. Of course, they have venom! They come out complete with fangs and venom; that is how they feed. Baby rattlers are completely on their own from the moment they are born. They must be able to feed themselves from day one in order to grow into big rattlesnakes.

You may have heard that baby rattlesnakes are MORE venomous than adults. This is not strictly true either. They may be more likely to bite simply because they are so tiny and vulnerable. After all, baby snakes are readily preyed upon by roadrunners, hawks, and other snakes. A tiny rattler is probably aware of his vulnerability in this great big world.

It is reported that newborn rattlesnakes do not have the ability to rattle. The rattle is just a single segment, called a “button,” at the end of the tail of a newborn. Since the rattling sound is produced by two or more segments rubbing together, then a newborn should not be able to make a sound by shaking its tail. That is, not until it sheds its skin for the first time, at which point a second segment is produced.

Our little rattler under the rosebush did make a slight sound. So I guess it was not a newborn. Still, this is the time of year for newborns. Female rattlesnakes give birth to litters of 9 to 14 young in early autumn. A baby rattlesnake can be as small as nine inches long, but they average about a foot long. Our baby was just about that size, so it couldn’t have been more than a month old. Maybe they can make a bit of a sound with that newborn’s button.

Baby rattlesnakes head out from their birth place, feeding on mice and tiny mammals as they go. By winter they need to be in communal dens where they wait out the colder days. They may become fully active during periods of warm mid-winter weather but usually stay in the vicinity of their den from November until March. This sheltering together in winter makes it easier for the males to find the females in early spring. After denning together for several months, they mate before they go their separate ways. Dispersing snakes may move as far as three miles from their dens to their summer ranges.

Since we had determined that our baby snake was indeed a rattlesnake, we decided to move it well away from the house. We wanted to let it go in the deep brush where it could live out its life as it should. My husband sent me to get a pair of long tongs and he went to get a five-gallon bucket. A few minutes later we met back at the rosebush. Guess what? No snake. We felt foolish, which of course we had been.

The baby rattler had made its exit perhaps to live and bite another day. I wear my boots and watch where I step. I look before I reach into flower beds. I am being careful out of respect for the rattlesnakes, but I don’t fear them. After all, venomous snakes are just “another strand in the web of life.”

Still, a day later, I was mighty glad to see a fat, five-foot long Indigo Snake near the rosebush where we had seen the baby rattlesnake. Since indigos readily eat rattlers, I suspect the baby snake was its dinner. Isn’t it great that Indigo Snakes make up yet another strand in the web of life?