Eastern Cicada Killer Wasp (female) – The eastern cicada killer wasp is common in Victoria in late summer. This female has been digging a breeding tunnel below the edge of our deck. She will dig down 10 inches or so and then build several side chambers, where she’ll lay eggs for next year’s crop of wasps. For food, she will sting and paralyze two to three cicadas that she will bury alive with each egg. The eggs hatch, and the larvae eat the cicadas as they grow and mature enough to dig out as grown-up wasps next summer. While big, up to 2 inches long and scary-looking, cicada killer wasps are docile, unlike yellow jackets. Just don’t try to grab one with a bare hand. 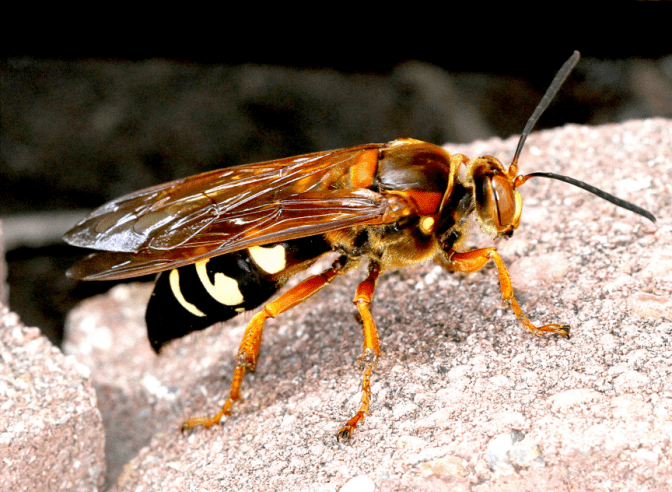 For us, one of the signature sounds for hot summer weather in Texas has always been the cicadas singing in the trees in our backyard.

They cannot be confused with any other wasp, bee or hornet. Huge, up to 2 inches long, their orange-translucent wings span 4 inches. A shiny, black abdomen displays three yellow bands with six orange legs showing numerous hooks on the edges. The hooks are used to capture and hold prey that they spot with their yellow-orange compound eyes.

Their flight is fast, agile and graceful. They easily hover over open ground to find nest sites and can accelerate quickly to swoop among branches and foliage like the predators they are. They are loud; if it’s quiet, they can be heard 15 to 20 feet away.

These wasps are solitary, with females burrowing into soft, dry ground in late July and August to build nurseries for their young. Males emerge from these cavities earlier than females. Males are territorial, claiming and defending localities, even buzzing people or pets entering that space. They are harmless, with no sting or venom; they’re just looking for a mate.

Females appear mid-July to mate and start digging nest tunnels. These ladies are serious diggers, punching holes 10 to 12 inches down and about a half-inch across. They loosen the soil with their front legs and push it out the entrance with the back pairs of legs. At the bottom, they build numerous, oval side chambers large enough to hold two to three cicadas and a wasp egg.

Females then hunt cicadas, probably by sight versus sound, because most captures are females rather than loud males. They capture prey on the fly, injecting paralyzing venom with a formidable stinger, then flying or sometimes dragging the victim to the nest. They are strong and able to move a cicada weighing 2.5 times their weight. In the burrow, she lays an egg on one of her victims then seals the chamber. Eggs hatch in 2 to 3 days, and the wasp larvae gradually consume the cicadas.

After two weeks, fully developed larvae spin a cocoon of silk mixed with sand and soil. Centered in the cell by silk strands, they pupate during the winter, remaining dormant till early summer, when they emerge as adults. Females build and populate nurseries from late July till death in October.

Cicada killers are a danger to cicadas. While their size and coloration says “stay away from me,” they are docile. Females can sting, but a person or pet has to really bother them to have it happen. They are nonaggressive; you can sit right next to one of their nursery holes and watch them come and go.

They won’t bother you at all. Want to observe them nesting? Look for dry, bare spots in flower beds or next to sidewalks or driveways. Their digging brings up lots of dirt, up to 100 cubic inches, which they leave around the entrance in an easily spotted, horseshoe pattern. The open end is where they land and drag in their victims.

Can they be a pest? Perhaps, if you have a place they favor for nesting. Their soil mounds can be unsightly if a bunch decides your yard or turf is prime real estate. If so, it will be temporary; the next rain will flatten the dirt piles.

See several together? You have nothing to worry about. It is not an aggressive swarm; it’s a bunch of stingless males jousting for territory and courting females.

Reprinted from Paul and Mary Meredith’s Master Naturalist in the the Victoria Advocate.