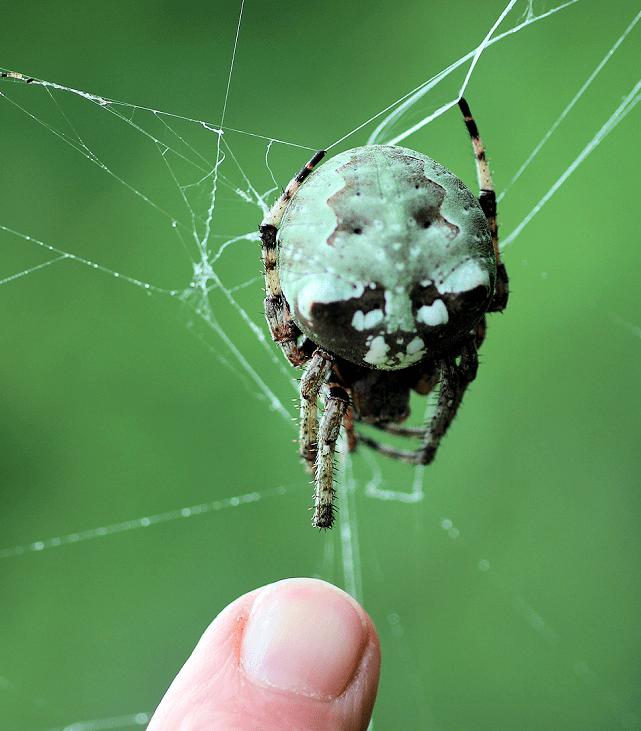 I discovered “Charlotte” (that’s what I’ve named her) when I accidentally pushed my face into her six-foot wide web. She is the size of a walnut and as heavy as a tarantula. She wears a wonderful disguise that makes her resemble common lichen. She has taken up residence below the limbs of a hackberry tree where I’ve been visiting her every day. Robert Benson Photo.

Just when I think I have seen everything that Nature has to offer, I run across something new. In this case, I literally “ran into” a spider’s web.

I danced the little jig that most of us do when we run into a spider web. After I rubbed the sticky strands from my face, I examined the web.

This was no ordinary spider’s web. It was huge! It stretched from a hackberry limb above my head down to the ground. This web was a good six feet across. And right in the middle was a round ball of lichen.

Or so I thought. I looked closer at the ball. Suddenly it moved! I could see now that it had legs—eight of them. It was a spider. It kept its legs tucked up underneath its body, unlike many large garden spiders. Its body was the size of a walnut. And the color patterns on its big, round carapace resembled the lichens on surrounding trees. I had never seen a spider quite like this before.

A search through A Field Guide to Spiders & Scorpions of Texas by John Jackman helped me identify it as an orb-weaver. Orb-weavers spin those classic spider webs that are almost circular, with spokes radiating out from a central hub. Sticky threads spiral around the spokes, making a distinctive wheel pattern.

The guide went on to explain that the most common orb-weavers are members of the genus Araneus. This genus contains both large, heavy-bodied species and smaller ones. The “large species” have females that are at least eight millimeters (1/3 of an inch) across. And in some of these species, the female measures 28 mm! That is more than an inch; definitely the size of a walnut. I was convinced that my orb-weaver was one of the large Araneus spiders.

Only five species of these big orb-weavers occur in Texas. The light gray-green coloration and patterns indicated it was Araneus bicentarius, the Giant Lichen Orb-weaver. The color and patterns resemble the abundant lichens on the twigs and bark of many brush plants.

Lichens are fascinating in their own right. A lichen (pronounced LIKE-n) is a combination of green algae cells and fungal hyphae. It is a great symbiotic relationship. The algae photosynthesize and make food; the fungus forms a protective network around them both. Over the eons, lichens have evolved one of the world’s greatest partnerships.

The Giant Lichen Orb-weaver has a wonderfully cryptic and camouflaged appearance. It so closely matches lichen-covered bark that even though it is a big spider, it is easy to overlook. Plus it has evolved some special behaviors that make it even harder to find.

I talked my husband into photographing this creature. But when we went to the site, the web was empty. Fortunately, I had read that this spider makes itself a retreat in an upper corner of its web, where it spends the day. Sometimes it even gathers in the used web silk during daylight hours, rebuilding its web fresh each night. This girl had left her ragged web out, but had retreated to her hidey-hole. I knew just where to look. The spider makes an inverted cone of silk and vegetation at the uppermost attachment of the web. We peered in. She was home.

We touched the web with a twig and jiggled her hiding spot until she came out. Back in the center of her web, she posed for a photograph, but she didn’t stay long. It was mid-morning and she knew that it was time for her to be in her retreat.

For several days, I checked on the Giant Lichen Orb-weaver. Today, her web was in tatters but she was in the conical retreat. She had a silk-wrapped bundle with her. It was the remains of a large insect she had caught the night before.

She is alive and feeding well. I hope she finds a mate. Male Giant Lichen Orb-weavers hardly deserve the name “giant” being much smaller than the females. But I am sure she will be pleased to see him, all the same.