Giant Squash is a Stinker!

Recently, I found the biggest squash plant I had ever seen.  It was growing in an abandoned pasture and was easily 30 feet across.  At least, I thought it was a squash plant.  Its flowers were large orange blossoms that resembled those of garden zucchini.

Of course, I had to touch the leaves to see if they were really dusty or just fuzzy.  And that is when I found out this plant’s secret.  It smelled awful!  Just touching the leaves released a stink that can only be described as nauseous.But a closer look led me to believe I was looking at a wild gourd vine.  The leaves were a dusty-looking grayish-green and triangular in shape.  The small fruits were striped and about the size of baseballs. 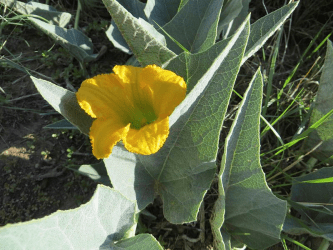 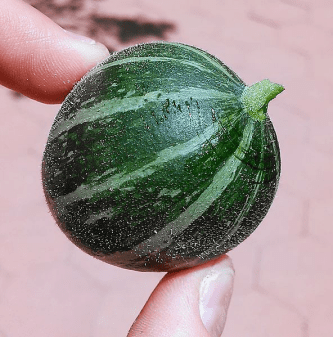 I had discovered Buffalo Gourd.  Its Latin name tells it all:  Cucurbita foetidissima; the “very stinky gourd.” This is why it is also known as Stinking Gourd and, in Spanish, as Calabacilla Amarga.  One source called it Calabacilla Loca!   It is indeed a crazy gourd; one that smells dreadful, tastes bitter and is a crazy excuse for a squash.   Why would any sane person mess with such a plant?

I expected that the Buffalo Gourd would be an oddity.  It was likely a plant that was well-known but of little use to Native Americans and newcomers alike.  It was not only stinky but too bitter to eat.  Even wildlife avoid it!

For one thing, the leaves, stems, and fruit are bitter.  The bitterness is due to a toxic compound called cucurbitacin.  Cucurbitacin is found in a number of species in the family Cucurbitaceae, the Gourd Family.  It is, of course, the plants’ way of protecting themselves.  Most animals, and even most insects, will not eat the leaves or fruit of Buffalo Gourd.

But I was wrong.  Native Americans had many uses for Buffalo Gourd.   Even though the little fruits and the contained pulp are full of the bitter cucurbitacin, the seeds do not have any of the poison.  In fact, they are quite nutritious, rather like pumpkin seeds.  The would-be eater just must make sure the remnants of pulp are completely removed from the seeds.  After sun-drying and maybe roasting, the seeds could be hulled and enjoyed.  But these seeds were more than a treat.  Buffalo Gourd seeds contain 35% protein and up to 43% oil.  And since each gourd had up to 300 seeds, they could provide a lot of food value in a small package.

The archeological record reveals that Native Americans in the Southwest and Mexico have used Buffalo Gourd for over 9000 years.  Perhaps one of the most unexpected uses for the gourd was as a cleaning agent.  A mixture of the leaves, stems, and gourds in water provided a soap-like solution that could be used to clean clothing, dishes, hides, and even human bodies.  I imagine it might have been a bit strong.  I wonder what the native peoples used as a conditioner after a Buffalo Gourd shampoo.

Beside their nutritious seeds, the dried gourds were used as containers (if well cleaned) for food and water.  The thin walls of the small gourds and the lingering bitterness may have prevented extensive use of them for such purposes.  However, ceremonial rattles, especially those worn on ankles and clothing, could be made from the gourds.

For larger containers and rattles, the more substantial Lagenaria gourd species was used.   This was known as the “bottle gourd.”  It is well-known from the old world and seemingly was introduced to the Americas.  However, it was so early on incorporated into the flora of the new world, its history is blurred.

Still, the lowly native Buffalo Gourd had a few characteristics that made it more valuable than the Bottle Gourd.  For one thing, it could grow in arid areas.  In fact, Buffalo Gourd can survive on as little as 6 inches of rain a year.  This makes it a plant of dry brush country and deserts.  Few plants can produce so much food as Cucurbita foetidissima in such marginal habitats.

One other feature of Buffalo Gourd is truly astonishing.   It is a perennial, coming back from its roots year after year.  Humans soon realized that there must be a large store of nutrients in its underground root system.  Digging down, they found that Buffalo Gourd had a huge taproot.  In fact, a three- or four-year-old plant might have “a taproot as large as a small man (approximately 150 pounds)” according to Matt Turner in his Remarkable Plants of Texas (2009).

The taproot frequently branches into two or three sub-taproots.  Given its size and these branchings, the underground portion of Buffalo Gourd looks a lot like a human torso.  The first photo I saw of a taproot was a bit unnerving!

This has led to the idea that the plant is good for what ails the body part that resembles the plant part.   This belief, sometimes referred to as the Doctrine of Signatures, is based on similarities in shape and form between plants and humans.  Under such a belief, a liver-shaped leaf is good for the liver.  A taproot that looks like a female torso might be useful in curing ailments in areas corresponding to the regions on the taproot/torso.   I know: it is weird.  But such beliefs have been, and are still, commonly held.

One thing is true about the Buffalo Gourd taproot.  It is full of a very nutritious starch.  Over 50% of the root is a useful food substance for animals and humans.  No wonder, the University of Arizona is investigating this plant as an agricultural marvel.  It could be the crop of the future in arid areas.

Is there a Buffalo Gourd in your future?