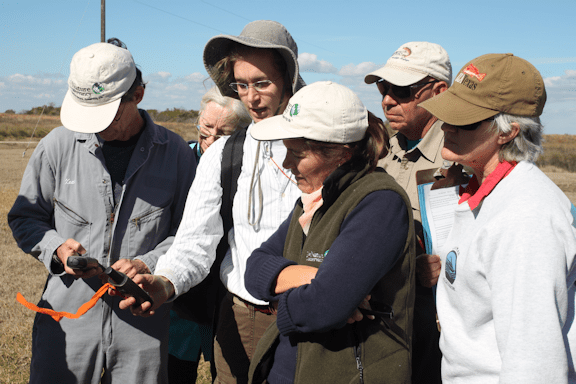 “If you know Little Bluestem and Cordgrass, you’ve identified 70 percent of what’s out there,” said Charlotte Reemts, Research and Monitoring Ecologist for The Nature Conservancy of Texas. Thus began the new vegetation monitoring program at Mad Island Marsh Preserve. During the three-hour classroom session, we learned that we were the first to be trained on this system of monitoring which will also be used at two other Nature Conservancy Preserves: The Texas City Prairie Preserve which has been one of only a few locations to host captive-bred Attwater Prairie Chickens, and the Nash Prairie, one of the most pristine remnants of the Great Coastal Prairie left in the state. The intent of this monitoring is not only to evaluate land management practices such as grazing and prescribed burning but also to measure the ability of the habitat to support the myriad of bird species for which Mad Island is so well-known.

After a detailed discussion of the field techniques and a review of common grasses, woody species, and forbs known to be found at Mad Island it was time to get outside. During the practice
session on the lawn near the lodge, we began by learning how to find a sample point. As indicated by dots on an aerial map, we would need to find one of the 164 spots identified by a computer program used for random and thorough sampling of this 7,000 acre preserve. Fortunate for us, Charlotte and Julie Sullivan, the preserve manager, supplied us with preprogrammed GPS devices. 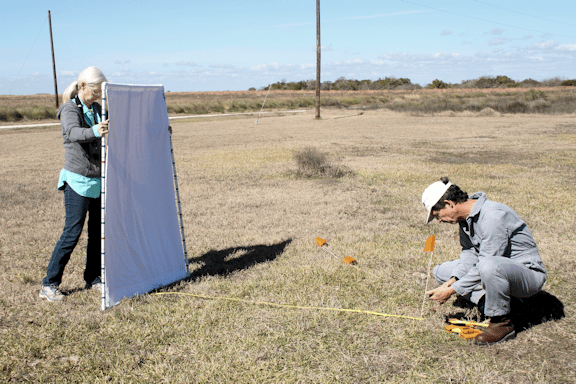 After learning to locate the point, we used a compass to find the cardinal directions (north, south, east, and west) flagged each direction, and marked a 2.82-meter radius. Next we captured a series of photos: general landscape, vegetation height & density, and ground cover. While one person shot the photo another would record the photograph jpeg number on the data sheet to ensure accurate identification during downloading and data-processing. Finally, we needed to identify the plant species within the plot. Here’s where we were forced to progress from the Bermudagrass lawn out unto the prairie.

Guided by the GPS, we walked through the prairie to locate our first sample point, assaulting Charlotte with a barrage of requests and questions along the way. Sprinkled in the vast ocean of Little Bluestem and Cordgrass, we found woody species such as Persimmon, Lime Prickly Ash, False Indigo and Mesquite; forbs such as False Foxglove, Ragweed, and Sneezeweed. And the most challenging for us were the other grasses: paspalums, dropseeds, lovegrasses, panic grasses, gramas, and rosette grasses. 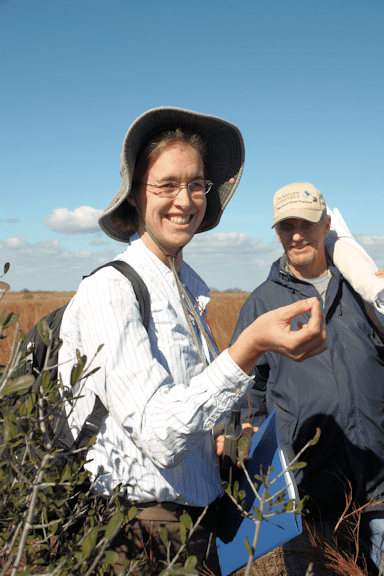 It took us the rest of the afternoon to complete just two plots but everyone took their turn at each step of the process  and all felt they gained a wealth of knowledge. We are eager to tackle this new project and uncover the mystery of what lies within our prairie. With just eight of us trained, we would like to recruit more help. If you would like to extend your knowledge of prairie plants and begin an intimate relationship with this intriguing habitat while contributing to the impact of land management practices and having fun doing it – email me, or call 713-825-1929. Or if you have an interest in contributing from the comfort of your home, we also have opportunities for data- and photo-processing. We’d love to have you join our group of volunteers here at Mad Island!