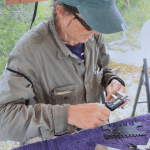 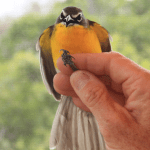 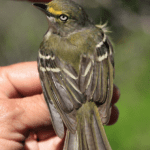 A collaborative bird banding & education project was initiated this spring between The Nature Conservancy and the Smithsonian Conservation Biology Institute—part of the Smithsonian Migratory Bird Center at the National Zoo in Washington, DC. This project looks at stopover ecology of migrant songbirds at The Nature Conservancy’s Clive Runnells Family Mad Island Marsh Preserve near Collegeport. The Gulf Coast of Texas is a tremendously important area for the many millions of migratory birds that fly across the Gulf of Mexico from their Neotropical wintering grounds to their breeding grounds in the U.S. and Canada. For many of these birds, places like Mad Island Marsh Preserve are the first land they see after making the energy-draining flight across the Gulf, and they need to stop or “fall-out” in order to replenish their energy stores before continuing the journey north—especially if they meet obstacles such as bad weather along the way. So, while birders get giddy about these coastal fall-outs of migrant birds, what we are actually seeing is stressed-out birds trying to recover from a near-death journey over the Gulf.

In order to assess the condition of these migrating birds, Smithsonian contracted with local bird-banders Bea & Jim Harrison and Kathy Gunther, assisted by TMN volunteers, to measure the birds’ condition at Mad Island. We hope to grow this project into one with paired coastal and inland sites across the mid to upper coast so that we can compare the condition of birds that stop at sight of first land with those that make it further inland to places like the Columbia Bottomlands, which are known to be higher quality stopover habitat. Ultimately, we may be able to use tools such as stable isotope analysis to determine whether the birds that make it further inland originated from better quality wintering grounds, which could have ramifications for how we approach songbird conservation throughout the birds’ life cycle.

Based on information from Rich Kostecke, PhD, Assoc. Director of Conservation – Research & Planning, The Nature Conservancy