On Saturday March 22, 2014 a container ship collided with a barge carrying large amounts of fuel oil and spilled about 170,000 gallons of oil into the water near Galveston. The fuel oil is known more formally as RMG-380. Contact with RMG-380 can generate skin and respiratory system irritation. Vapors can irritate mucous membranes, produce nausea, headache, difficulty breathing, loss of muscular coordination, blurred vision, asphyxia caused by lack of oxygen, and convulsions.

Since it was the barge carrying the oil, its owner, Kirby Inland Marine, provided the workforce to clean up the spill.

A unified command consisting of representatives of the U. S. Coast Guard, the Texas General Land Office, and Kirby Inland Marine was quickly formed to contain the spill and clean up the oil from the beaches and waters.

Fortunately, the oil did not move into the Gulf Intracoastal Waterway and down into the critical estuarial waters.

Unfortunately, the combination of winds, tides, and currents drove the oil onto Texas beaches from Galveston Island to Padre Island. The worst of the damage centered on the beaches at the south end of Matagorda Island. Response area maps indicate that the beach from about 5 miles north of the Pilot House road down to Cedar Bayou was considered heavily impacted. Representatives from U.S. Fish and Wildlife Service, Texas Parks & Wildlife Department, and the General Land Office worked closely with the cleanup team to help protect the wildlife and fragile habitat of this environmentally critical island. Upwards of 400 people per day were working on the island. The extent of the spill required the use of masses of machinery in the form of Bobcat loaders and dump trucks to scoop up the contaminated material and get it off the island. As of April 6, an estimated 219,000 pounds of oiled material had been removed from Texas beaches, about half of that (108,670 pounds) from south Matagorda Island alone. 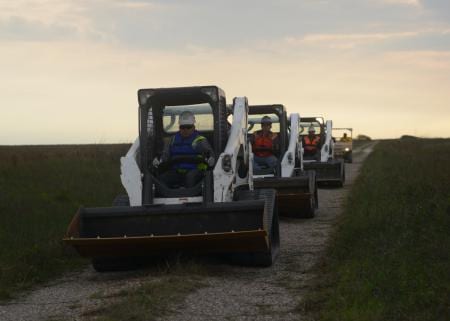 A U.S. Coast Guard photo taken April 5 showing some of the equipment being used to clean up the spill on Matagorda Island

When the emergency-response phase of the incident came to a close, the next phase of effort was a damage assessment to determine how much damage has been done to the island and to estimate what reparations could or should be made.

The damage-assessment phase was a meticulous collection of data and careful handling of evidence. It was much like a crime-scene investigation. Evidence was collected and tagged, and chain of custody documented and carefully maintained. The work involved was extensive and critical to any mitigation settlement to follow. This was an operation requiring professionals expert in the collection and handling of environmental damage evidence.

The emergency response was much too massive to use our volunteer help. The damage assessment phase required expertise in methodologies that we do not have. As much as those of us who volunteer for Aransas and Matagorda would have liked to participate, there was no opportunity to help.