It’s the Season for Baby Birds 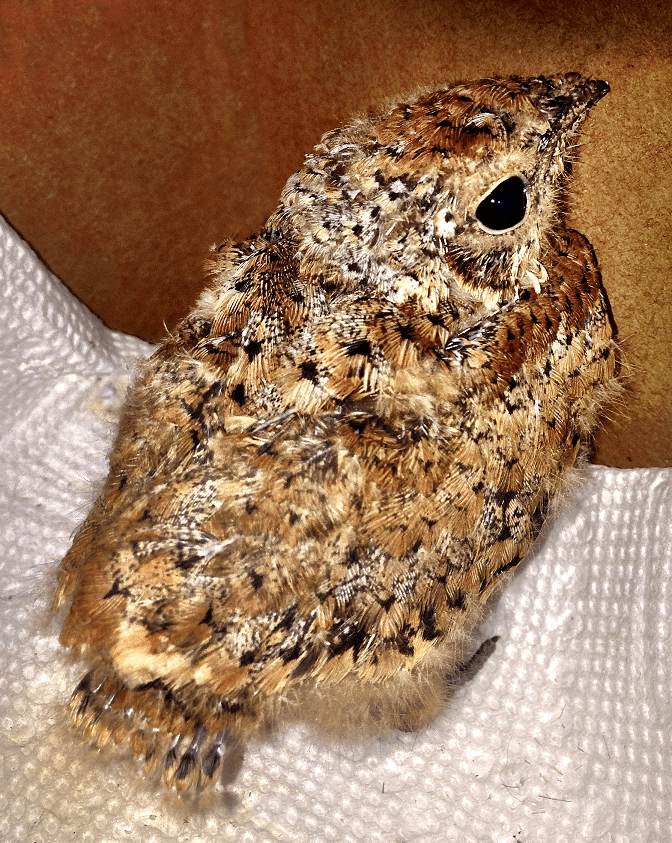 This baby Pauraque had been separated from its parents and was running up the road on the Benson farm. It is now homed at the ARK in Port Aransas, Texas.

“What is that?” we both said. We were coming back from closing the chicken pen. It was just after dark on a moonless July night. Something was running along the dirt road in front of us. It looked like a baby chicken.

In fact, it was a chick, but not a chicken’s chick. It was a baby Common Pauraque. It still had its downy feathers. It couldn’t fly, but it could run. The chick was moving along pretty fast. I had no idea that such a young pauraque could run like that.

We didn’t see its parents anywhere. Perhaps it had run quite a ways from the nest. And it was exposed and vulnerable. It was looking a whole lot like a bobcat’s dinner (or more like an hors d’ouvre).

So, I had my husband catch it. It was fast, but Robert was faster. I had no idea my husband could run like that!

We put the small creature in a roomy cardboard box and closed down the lid. It was dark, safe and quiet in the box. The chick was calm, but it made tiny little pauraque-like purrs and chirps.

We couldn’t keep the chick. We knew it was too young and would have to be fed. Besides, you are not supposed to have a wild bird in your possession without a permit. It would need regular feedings of insects, preferably large juicy ones. So we arranged for it to go to the ARK in Port Aransas. The ARK is an animal rehabilitation facility at the University of Texas Marine Science Institute. A young rehabber there has had great success caring for baby nighthawks and nightjars.

Of course, the rehabber who took the bird to the ARK, accused us of “kidnapping” the baby. That stung a bit, but I still believe we were “rescuing” it from predation. Maybe the parents were around, and maybe it would have made it on its own, but I doubt it. It was acting too much like an easy meal for a coyote, bobcat or even a housecat. I am glad we rescued it.

Common Pauraques are residents in the south Texas brush country. But they are not found anywhere else in the United States. Pauraques are large, subtropical nightjars that can be found down into Mexico and South America. They are members of the Caprimulgiformes, the “goatsucker” family of birds. All of the species in this family have small, soft bills but they can open their mouths very wide. Most of them are nocturnal hunters that catch large insects in mid-air.

While most of the nightjars capture prey as they fly, the Common Pauraque waits on the ground for an insect to fly by. It then flutters up and catches the bug. I was also surprised to learn that pauraques have strong (but short) legs and actually can jump a half-meter or so into the air. This is in contrast to most of the other nightjars which have small, weak feet and do all their hunting on the wing. Pauraques have also been observed to run short distances on the ground after their prey. So, our “rescued” baby was getting his leg muscles in shape for his life as a Common Pauraque.

Pauraques nest on the ground. They are not great nest-builders though, preferring to simply use a slight depression to which they may, or may not, add a few dead leaves. The nest is usually just under the edge of a patch of brush. The female lays two pinkish-buff eggs in the nest. Little else is known about the incubation of the eggs. When the semi-precocial chicks hatch, their eyes are open and they can move around a bit on their own within just a few days. It is thought that they stay in the vicinity of the nest. Both parents feed the chicks by opening the chicks’ tiny bills slightly and regurgitating insects into their gaping mouths.

On this high-protein diet, the chicks grow fast. Soon they begin to grow feathers and probably accompany their parents to the sides of roads and cowpaths to hunt for food. This is where we usually see pauraques: on the sides of rural roads. Their large eyes shine rosy-red in the headlights of vehicles.

You are most likely to identify pauraques by ear first. On most nights, from February to July, and indeed all year, you can hear their distinctive calls. It is said that their call is where the name pauraque came from, but they don’t say “Puh-Rah-Key” really. What I hear is a burry, whistled “Pur-WHEEER.” Perhaps the Spanish name “cuiejo” or “pucuyo” is a better rendition of the sound.

We heard from the ARK the next day. The chick had been fed fresh, juicy mealworms and had even gained weight overnight. In a couple of weeks, it should be ready to release back into the wild.

I want to release it back here where we found it. It was born here and its parents are sure to still be here. Maybe they can re-unite!