Welcome to the Nut House

The phone rang. It was Dianne. “Hey! Amanda Terry at the ARK (Animal Rehabilitation Keep) has a little Fox Squirrel that she has been bottle-feeding. She would like to get someone to prepare it for release, and I told her that you might be interested.” THAT was how it began! 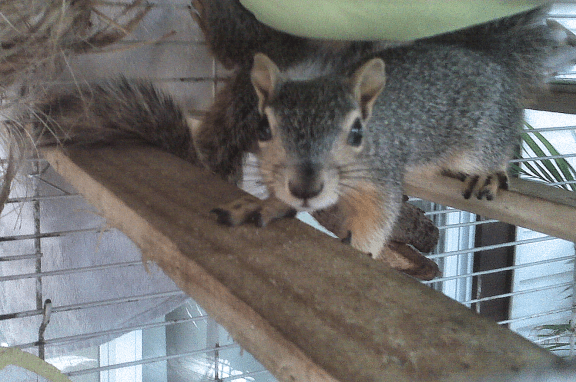 Dianne Nichols is a friend and fellow TMN who is volunteering at the ARK. We have both raised and released quite a few orphaned animals in the past. Sometimes Dianne takes care of the early care and then I will help out with the second-stage care and release. Sometimes it is a friend who brings me baby squirrels—eyes closed and orphaned. Squirrels this young require a schedule of formula, cleaning, and keeping warm. That is a time-consuming and tedious job.

Amanda Terry is a rehabilitator and veterinary tech at the ARK. She was kind enough to let me take five baby fox squirrels that she had in her care to prepare them for life back in the wild. She had done the hard part; now I got to do the fun part.

Dianne delivered the first little baby from the ARK. I put him in the cage with food, hammock, water, and branches to climb on. He was very shy, but soon found the hammock that hangs from the top of the cage. I keep the squirrels on the covered back porch where they can see other squirrels and hear the sounds of the birds, dogs, goat, and guineas. Through the patio door, I can check on them without going out on the porch all the time. I usually put several towels on the bottom of the cage for the babies to hide under until they feel safe enough to explore the cage. I put towels over the top of the cage, which gives them a sense of security. 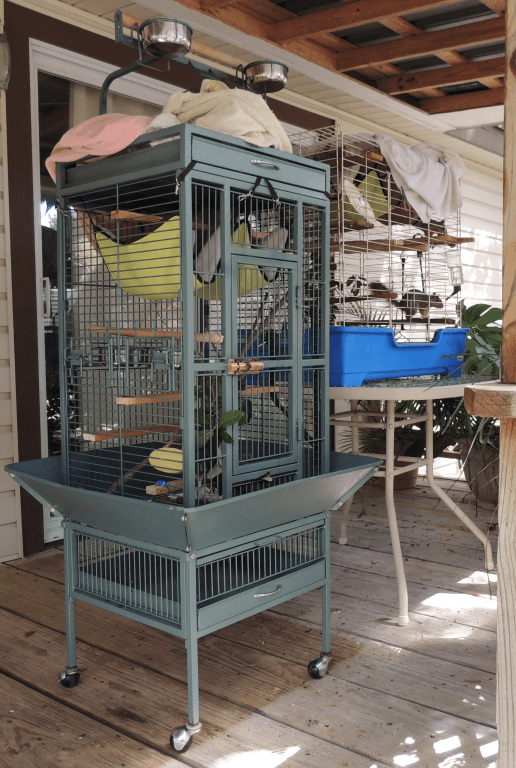 Ten days later, I got another male from the ARK about the same age. My husband and I put him in a separate cage and set the two cages together. After watching their behavior for a day, we decided to put them together in one cage. There was nothing shy about this little one. He was very curious and in my face every time I went to feed or change the cage. These two really seemed to enjoy each other’s company and played a lot.

The most recent three ARK babies I am working with are younger than the first two. They are littermates and have just stopped receiving formula.

Feeding the babies is like preparing a buffet lunch. I offer one bowl of fresh fruit and veggies: baby kale greens, grapes, berries, rose hips, avocado, tomato, apple, plum, peach, sweet potato, banana,  green beans—all the good stuff. (I have never had the checkers at HEB ask why I only buy 5 green beans at a time.) The other bowl is a mix of sunflower seeds, acorns, peanuts, pecans, dried mealy worms, rodent blocks, bird cuttlebones, and monkey biscuits. They are eating just about everything that I offer them and are now cracking pecans on their own. I have found that they like to chew on the cuttlebones, which provide calcium and minerals. I even tie one to the feeders in the trees.

I try to introduce the little squirrels to food that they will find in the wild. I put pine cones, oak branches with lichen, and guinea grass in their cage for them to chew on. They like rose hips and dried sunflower heads. Recently, I put a pan of sand in the bottom of the cage for them to play in and have a place to bury their food. I walked out to put some seeds in the bird feeders, and when I turned around, the sand was flying everywhere. I guess digging is a lesson, too. Anyway, it was a lesson for me—I had to sweep the porch.

Normally I try to release them at 12-14 weeks, depending on the weather at the time. When I am ready to release, my husband and I move the cage out under the oaks where the feeders are. Then, after a few days, we open the cage so they can go when they please. I can’t control what happens when they go back to the wild, but I do watch closely the first day to run off hawks, owls, or adult squirrels. The young females have an easier time adjusting. The little males have to be very wary of the grown male squirrels.

Last year I released three. Two went on their way the first day. One little girl came back every night to sleep in her hammock for about a week. One little boy squirrel I released two years ago still comes to mooch food. He has been very interested in the cages on the porch and whatever food he smells. 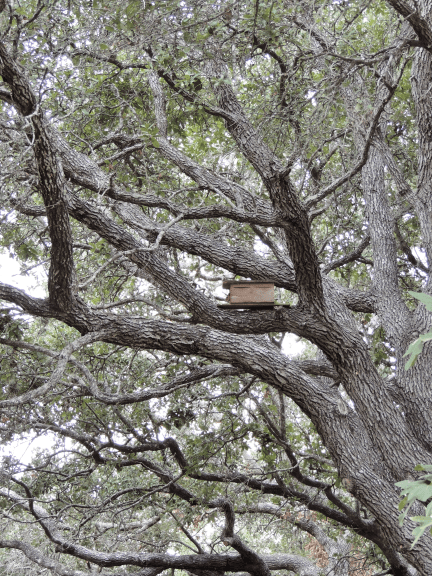 My husband Larry built boxes to put in the trees for temporary shelter until the squirrels build their own nests. Sometimes they use them. This year at least one baby liked it.

One of the last three that we released is back in the cage on the porch. He stayed out until Saturday and then wanted back. Don’t know what I’m going to do about him. He was following me around on the ground and on the porch. With the Red-shouldered Hawk and the owls that live in our yard, I couldn’t leave him out. I put him back in his cage on the back porch. He ate like a pig, got in his hammock, and—I swear—gave a great big sigh of relief.

I have so much fun working with the baby squirrels, and now I get volunteer hours for it. It’s just great!