Why Didn’t the Horned Lizard Cross the Road? 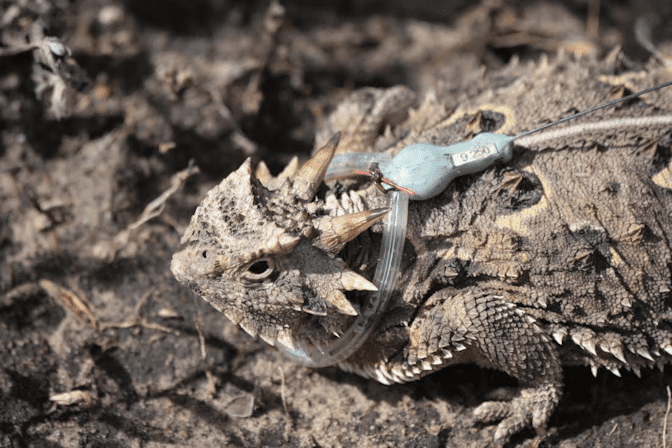 You would think that they would cross roads; at least smaller roads. But a recent study of Horned Lizards in Karnes County showed that most of the lizards there do not cross the roads.

Ashley Wall, a graduate student at TCU, found that the lizards in her study area in Kenedy stayed in relatively small home ranges. The average range size was about 0.8 of an acre. She found this out by putting small transmitters on the Horned Lizards and then radio-tracking their whereabouts.

This procedure is not as easy as it sounds. First, you must find the lizard; not an easy task. It helps to look for their proper habitat first. Horned Lizards like relatively bare ground in arid areas, preferably with several red harvester ant colonies around. These ants are the lizards’ favorite food, although they eat desert termites, too. You can also look for their distinctive scat. Horned Lizard scat is about an inch long with a little white ball of uric acid on one end. The scat will be found on open ground. Partially decomposed scat will show bits of ant exoskeletons in it. Horned Lizard scat in the right habitat is a sure sign there are Horned Lizards around.

Just walking up on a lizard doesn’t guarantee that you will see it. They usually stand stock-still. Their gray and cream colored patterning camouflages them very well. However, when they move you have a pretty good chance of seeing them. If you drive over a site with a utility vehicle, you can scare them into moving. Ashley Wall also found that she could locate Horned Lizards resting in the meager shade of fence posts.

Once she caught a lizard, Ashley glued a tiny, 1.4-gram transmitter to its back. She used the same glue that ladies use to stick on false eyelashes. She also attached a little collar made of fishing line threaded through plastic tubing and hooked to the transmitter. Then she let the lizard go on its merry way.

The transmitter readings on her tagged lizards revealed that Horned Lizards don’t go very far. Only a few ever crossed a road. Most stayed within a vacant lot or city block. This means that the lizards living in that block are isolated from those on the other sides of roads.

One could argue that the occasional lizard that does attempt to cross the road might not make it across. If it gets run over, that lizard is out of the gene pool. This could “select” for the stay-at-home lizards; the ones without genes for adventure-seeking.

It is also possible that the lizards living there see the roads as barriers, just like large bodies of water would be. It is almost like they are on an island. The animals on that “island” are limited to mating with the few other ones that are there. The result is inbreeding.

After a few generations, the genetic diversity within that inbred population is greatly reduced. Biologists believe that a lack of gene variation weakens a population. If the environment changes or disease strikes, and all the animals in the population are basically alike, there is a good chance that the entire population will be wiped out. By having some built-in variation, at least a few individuals may survive.

This research on Horned Lizards in Karnes County is showing us that small towns, with their network of roads, are actually creating islands. In this case, the lizards can’t or won’t cross the roads. They are no longer freely interbreeding. The result may be further decline of our iconic Texas Horned Lizard.

In this day and age, when suburbanization and fragmentation of habitat is going on all around us, we should consider what effect this has on wildlife. Corridors, connections, and undisturbed large tracts of land may be all that will save many species. 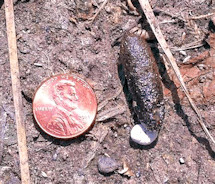