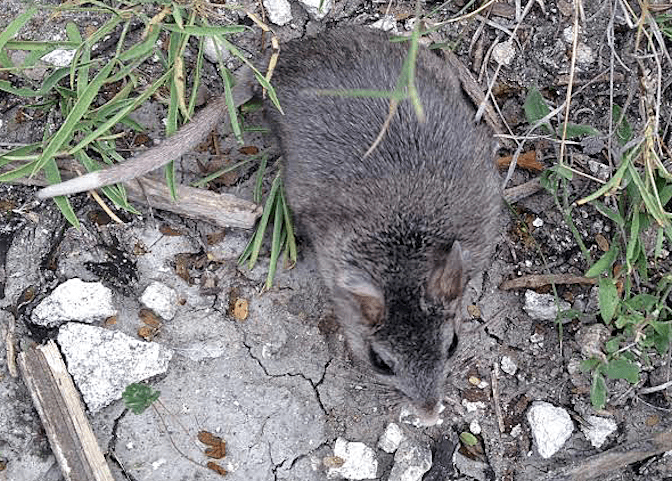 This Northern Grasshopper Mouse is a “veritable tiger among rodents.” Grasshopper mice, named for their favorite food, are five-inch long predators that inhabit the arid grasslands of South Texas. Their most striking characteristic is the wolf-like howl, audible to human ears at 100 yards! Carter Crouch photo.

Mice squeak. They do not roar or howl. Everybody knows that.

So when Carter Crouch, a graduate student at Cesar Kleberg Research Institute, claimed he heard a mouse “howl,” I really didn’t believe it. Carter told us he had captured the mouse in one of his research traps. While he was removing it from the trap, the mouse let out a piercing, high-pitched howl. The shrill scream “hurt his ears,” he said.

I wondered if Carter had gotten up too early, and perhaps just imagined a mouse’s terrified squeak was a howl. I was skeptical, but I have come across many strange things as a naturalist. So I checked my mammal field guides to see if such a mouse might really exist.

Reading through the text in The Mammals of Texas (Davis, 1978) I learned that there are over 60 species of rodents in this state. Squirrels, prairie dogs, pocket gophers, voles, even beavers, as well as 40 kinds of mice and rats, are rodents that live in Texas. As I perused the species accounts, one mouse species surprised me. The author compared one of its calls to the howl of a wolf which “is made with raised nose and open mouth in perfect wolf form.” The mouse was a grasshopper mouse.

Fascinated by this, I checked other books and eventually the Internet. The species of grasshopper mouse we have in this part of Texas is the Northern Grasshopper Mouse (Onychomys leucogaster) which has a white tummy and a white tip to its tail. And its most distinctive characteristic is its howl. In fact, you would think it would have been named “howling mouse.” Instead its name refers to its favorite food: grasshoppers and other insects.

Rodents, as a rule, are herbivorous. This means they feed on grains, seeds, and gnaw on nuts. However, the Northern Grasshopper Mouse is more of a carnivore.

Grasshopper mice are the most predatory of rodents. Studies show that 89% of their diet is meat in the form of insects, other invertebrates, and even small mammals. One guide referred to them as “veritable tigers among mice.” The Northern Grasshopper Mouse hunts its prey (especially the larger prey items) much like a cat, or a weasel. The mouse stalks, then rushes in to seize the prey, and kills it with a bite to the head.

Because they are predators, grasshopper mice occur at lower population densities than other small mammals. These rodents occupy large home ranges of up to 28 acres. They are wanderers, almost always on the go, and they do not stay long in one place. When they do settle in for a bit, they usually usurp the burrows of other small mammals, rather than construct their own. Grasshopper mice are solitary animals for the most part, except during breeding. Although a male and female may pair up and stay together for a while, this can be disadvantageous if food gets scarce. In cases of pairs in captivity, usually one mouse will kill and eat the other.

Okay, these are not your everyday grain-fed mice. Plus, there is this business of howling like tiny wolves. Carnivorous, wolf-like mice?

Why do grasshopper mice howl? Some references say that they howl to establish and maintain territories. This is likely because individuals have been observed to howl at the sight of another grasshopper mouse. Since the howl is audible at 100 yards, it is also possible that a mouse calls or “sings” to attract a mate. Grasshopper mice have complex courtship behaviors and the vocalizations may be a part of courtship and mating.

At least one account mentions the howl being given just before a kill is made. This seems counterproductive to me. If a predator makes a sound just before it seizes its prey, it seems like it might “tip off” the prey. Of course, it is possible that the shrill utterances cause the prey to be paralyzed with fear.

One thing is for sure, the grasshopper mouse will vocalize when caught in a trap, or when it is handled. Carter will vouch for that. Some sources say they will howl spontaneously. Perhaps they just enjoy standing up on their hind legs and singing!

I can’t help but think these grasshopper mice would make interesting pets. Imagine having a terrarium with a tiny rodent that throws its head back and howls like a wolf and then bites like a tiger!